Imagine, if you will…

…a man looking for a unique looking kayak. Now imagine this man talks to NC Kayaks about what he thinks would look cool. Now imagine a world where a kayak manufacturer comes up with a plan, does proof-of-concept testing, and then builds this man his kayak. You have entered the plaid kayak build.

After discussing all the ways we can customize the finish on a kayak, we had someone who wanted more. Specifically, he wanted plaid. I don’t know if you’re familiar with the limitations of gel-coat, but laying down multiple layers in a complex pattern just isn’t something that generally goes well. Years ago, I had seen patterned fabric laminated into some test pieces. I started thinking that might be a possibility, but only in the areas where I could get the fabric to lay flat.

Normally when laminating in the fiberglass cloth, we make slits in the fabric so that it conforms to the shape of the mold. We then add a second layer of cloth and slit that piece in a different pattern so that none of the slits on the two layers of cloth would overlap. While this is technically an option with plaid, it would be obvious on the patterned fabric and wouldn’t look good.

So we make a plan…

…to spray enough clear gel coat that it can fully cure. Usually, we spray a thin layer of clear followed by the backing color almost immediately, before the clear fully cures. This procedure normally gets the results we want from the clear finish and doesn’t add too much additional weight. However, on this build, we are doing something different. Once the clear had cured I sprayed black on the areas with a lot of shape: around the hatch and fitting recesses, the nose and tail, and around the cockpit. 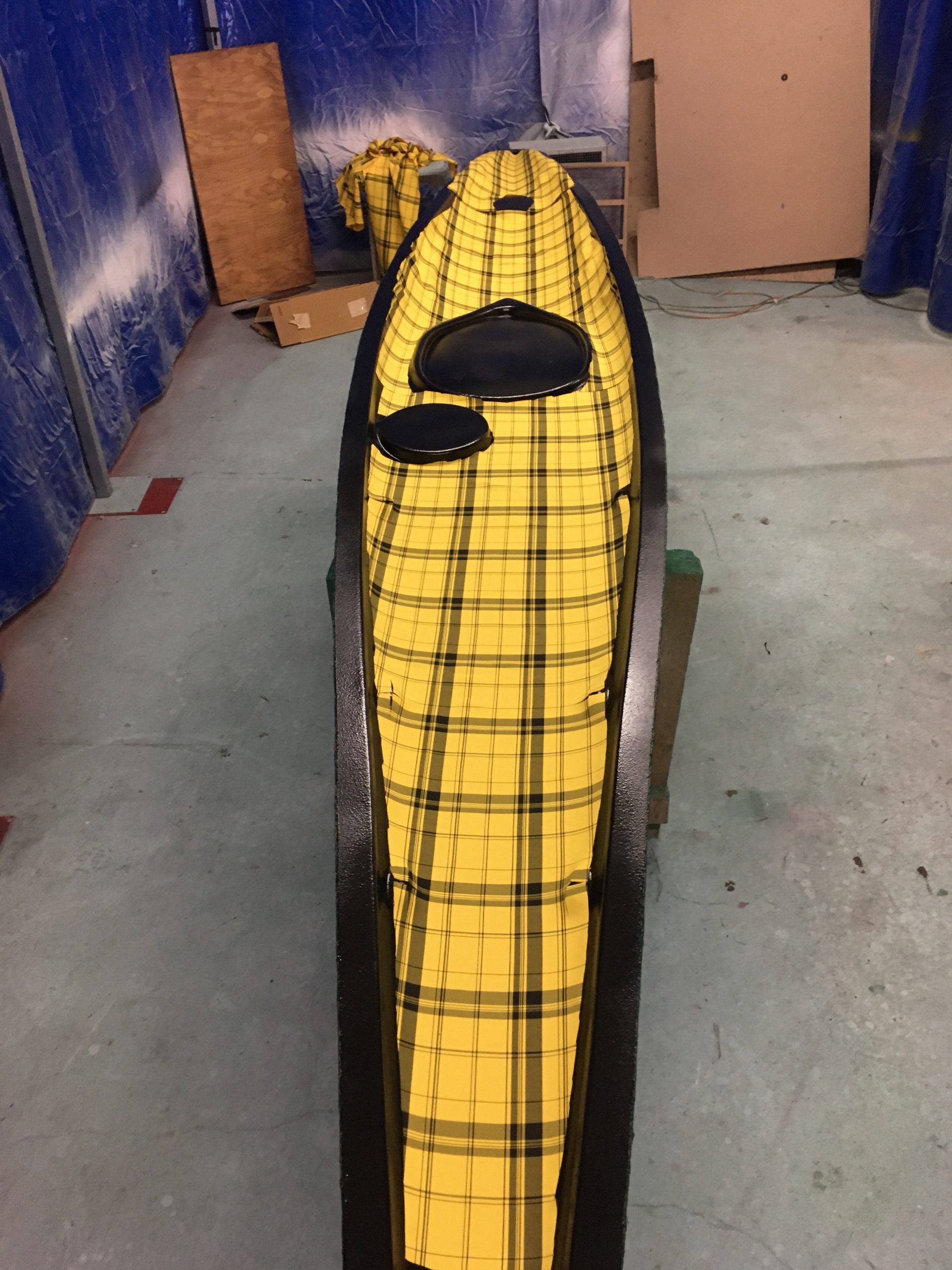 To get the plaid fabric arranged in the mold,  we needed an approach that would keep the fabric from pulling or bridging. We settled on three panels and we lined up the pattern as we wet them out with resin. We also made our initial slits in the fabric while it was dry. We then trimmed out excess fabric once it was wetted out. Once we got the plaid fabric down we laminated in the fiberglass on top and let it cure.

After we pulled it from the mold we inspected the deck for imperfections. There were a few tiny bubbles around the compass recess, but we were able to repair them. We etched them out, filled them with a clear gel coat, and sanded and polished it back to the original finish.

…the rest of the process is like the other kayaks we build. We cut the hatches and cockpit, install hatches, coaming, and seat, and then bond it to the hull. I installed one of the test bulkheads that I built while designing this kayak. I needed to test the ability to laminate a patterned fabric on cured clear gel coat. I did my first test with a torn shirt the customer gave me, before I ordered the final fabric.

I can’t say why, but it’s not until the deck lines, trim, and decals are on that I finally see what I have made. It’s in that final step that it becomes more than a collection of kayak parts and becomes, in this case, “Plaid the Impaler”.

A limited number of kayak ornaments made from our tests and hatch cut-outs from this kayak are available in our Etsy shop. 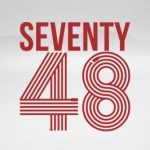 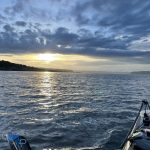 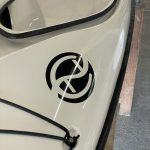