How I got Here

The Port of Angels

Much of my family lives in Port Angeles, Washington. I spent the first ten years of my life there and went back every summer into my 20s. The first time I was in a kayak was at Lake Sutherland, just a bit outside of town on Highway 101. I was 12 and Uncle Paul had picked up an old fiberglass kayak that wasn’t made by a company. It was probably the product of a paddling club mold set and someone’s desire to have a kayak. It was heavy and rough. The finish work was so poor that if you grazed your hand across the deck while paddling it would immediately leave you bleeding with a bunch of fiberglass slivers. It was the beginning of my kayaking journey and it was perfect!

Down the Rabbit Hole

In this little blue fiberglass kayak turning was easy… not turning was impossible. The wide kayak had a lot of rocker and a flat bottom. The tracking was so non-existent that Paul added a fin to the back to give it some directional stability. He sandwiched a long, wide piece of metal between two other pieces of metal with a single bolt. It protruded down into the water off the stern, and the bolt allowed it to flip up if it hit anything and not snag. This little kayak had opened the door to the world of kayaking.

The next kayak Uncle Paul bought was a Pacific Water Sports Sea Otter. This 16′ long kayak designed by Lee Moyer was our first introduction to a sea kayak. Again, the first time I paddled it was at Lake Sutherland. Uncle Paul had seen some old photos of Pacific Rim Native Kayakers and made kayak paddles based on those images. This kayak was a whole different beast. Compared to the first kayak, this was a rocket. Point it at the other side of the lake and it would take you there in a hurry.

The Sea Otter lacks a lot of today’s safety features. It has a bulkhead behind the seat, but it doesn’t have a forward bulkhead or any inherent floatation in the bow. It also doesn’t have any perimeter lines and the back deck comes to a point behind the cockpit so it is very difficult to roll. Before we took this kayak into the Strait of Juan de Fuca, we spent time in the lake learning rescue techniques. We figured out how to get back in it if we somehow flipped at sea. The first thing we learned was that even though there was no floatation in the bow, the kayak would stay floating level as long as you kept it upside-down or right-side-up. On its side in the water, it would flood quickly. I learned the scramble self-recovery at the lake and I even figured out how to recover the kayak if it flooded and went nose-down in the water.

One day while paddling out of Clallam Bay, the wind picked up and was coming out of the Northwest. As we returned to Clallam Bay, breakers appeared between us and the beach. When we launched, the water had been smooth. Now there were 5-6 foot waves breaking about 30 yards from shore. Uncle Paul was able to surf the Sea Otter in, but I was not as skilled. A wave caught me as it broke and I tumbled a few times before I got out of the kayak and (to my surprise) stood up in about 3 feet of water. Even though Uncle Paul was successful in surfing the Sea Otter to shore, the kayak was not unscathed. The deck had a lot of cracks running almost the whole length of the kayak, as it had flexed under the force of a surf landing and the fiberglass had fractured.

Uncle Paul again went searching for a better kayak. He tried many different kayaks from many different manufacturers. He ended up buying a Natural Designs Polaris II, designed by Dan Ruska. This was the first expedition-capable kayak I had ever seen. This kayak opened my eyes to what is possible in a kayak. I still measure kayaks against that kayak. Well, not against the kayak, itself. But against what that kayak made me feel. If I don’t have that slight tingle in my spine, the anticipation of what’s to come, then it’s not the kayak for me.

So that’s why I bought NC Kayaks. The kayaks we make give me that tingle. I worried that when the previous owner retired, these kayaks would disappear. And that was something I couldn’t let happen. My Uncle still has his Polaris II, I’ve gone paddling with him in Port Angeles Harbor and at Lake Crescent. Kayaking with my Uncle in a kayak I built brings symmetry to my paddling journey. From paddling a kayak someone made to paddling a kayak I made.

Where are you headed? 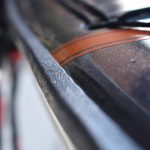 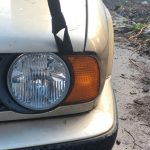