If the conditions are right, you may find that setting a shuttle car might just be worth it. You may have read about how we have primarily switched to circumnavigating islands (and island-hopping on occasion) for our training paddles. I’m a huge proponent for that plan. But in some circumstances, there is a significant reward to setting a shuttle car. Specifically, when it gives you the opportunity to get some good mileage in, as back-to-back paddles.

You may have read before that when we were training for the inaugural SEVENTY48, we paddled the entire race route as our training. For the second year, we didn’t feel it was necessary to re-paddle 100% of the race route, but we did have some specific areas we wanted to revisit. We also had a goal to get more training mileage than we had the first time, and longer training paddles. When we looked back at our logs, although we paddled a lot of days, our average training paddle was just over 6nm. More than 50% of our paddles were less than 5nm. The first time we ever paddled more than 15nm in a day was the second day of the race itself. Even the shortest day in the race was still in our top five for distance for the year. No wonder that race wiped us out so badly.

My office is in SeaTac, and (pre-pandemic) I usually commuted on the bus. One of the ways we’ve made setting shuttle cars a bit less onerous is for me to drive my car to work on a Friday. Then I take a ferry across the sound to leave the car in overnight parking. On this occasion, I drove up to Seattle to catch the Bainbridge Ferry and then drove the sixteen miles to Kingston to leave the car.

My husband met me in Kingston, we explored the marina and the park near the ferry terminal (which shares a parking lot with the boat launch), we took photos in the ridiculously huge chairs they have, went to dinner, and then headed home – a perfect date night. The next day, we would paddle from the Southworth Ferry terminal to Kingston – just over 20nm. Then on Sunday, we would launch from the Gig Harbor area to paddle back to the car we left at Southworth Saturday morning.

Part I: Southworth to Kingston

Launching from Southworth, we make our way to Blake Island for a short break and to adjust our layers. We then continue to Eagle Harbor on Bainbridge Island. We have to cross the Bremerton ferry lane on this leg of the trip. While we are always are cautious when crossing the ferry lanes, there is something about the Bremerton route that is a little unnerving. Something about how the ferries from Bremerton emerge from Rich Passage with very little warning. Something about how it’s difficult to distinguish between the Bremerton or the Bainbridge ferry as they leave Seattle. We’ve studied the ferry schedule. We’ve done this crossing enough. We are now familiar with the pattern.

Eagle Harbor has easy access to shopping, within a very short walk from the boat launch. There is a grocery store – great for stocking up on produce or adding a refrigerated or frozen treat to your day. There are several restaurants, including an ice cream shop nearby. If you realize after driving nearly an hour to your morning launch site that you forgot to pack your sunglasses, Winslow even has an outdoors store within a block or two of Waterfront Park.

From Eagle Harbor, we head to Fay Bainbridge. Fay Bainbridge has a special place in my heart. It’s the halfway point in the SEVENTY48 race. It marks the end of Bainbridge Island (which has often been a challenging area for us). It is the first spot we camped during our proof-of-concept training paddle about three weeks before the first SEVENTY48. When we took our break there in 2018, there were Adirondack chairs on the beach for us to relax in. You may not think of it, but a comfortable seat after paddling for 35 miles is a huge blessing. Even though we’ve been sitting the entire time we’ve been paddling, it’s not the same as lounging in a chair on the beach.

It is possible that Fay Bainbridge to Point Jefferson is my favorite crossing on the SEVENTY48 race route. We’ve crossed it at sunrise (once) and sunset (twice). It has been glass calm more often than not. We have never failed to see harbor porpoises on that section of water. The only time we’ve ever had a bad time was due to irresponsible boaters. That was the one time we crossed in the middle of the afternoon. During a race. Not too far afield from other human powered vessels that were likely pestered by the same boat. We’ve never been in a scarier situation in an open-water crossing. That includes the time we spend hours in fog so thick we couldn’t see either the shore we’d just left. Or the island to our starboard, the mainland to our port, or the whales we could hear breathing nearby.

As the sun sets over Suquamish and Poulsbo, the water turns silvery lavender and pink, reflecting the colors of the sky. There are hardly any other boats on the water at this time of night. The pleasure boaters have turned to their beach bonfires and the fishermen packed up hours and hours ago. The occasional cargo ship or cruise ship makes its way through the shipping lanes, far to the East of our path. We can see a train making its way between Seattle and Edmonds – a silver snake on the distant shore that sends a rhythmic rumble across the water. There is nothing more peaceful than what we’ve experienced in this crossing at sunset.

Final trek of the Day

Unfortunately, once you reach the fishing pier at Point Jefferson, you still have another 3 or 4nm to go before you reach the boat launch at Kingston. Those last few miles include three – THREE different points that each appear to possibly be the turn into Appletree Cove. The first two are lying – providing false hope, but only revealing another point in the distance as you pass them. Once you pass that final point, you have a clear view of the Kingston ferry terminal and the marina.

I may have cried most of that last mile as we paddled into Appletree Cove. The lights from the marina just seemed to stay the same distance away, no matter how long we paddled. It was now fully dark. We had little to give us perspective to prove we were moving forward at all. We knew it would be dark at this point, and had planned on it. One of the benefits of navigating to a marina near a ferry terminal is the amount of lighting you can use to pinpoint your destination. At the end of so many miles, it seemed like we would never finish. Since the sun had already set, my paddling partners luckily couldn’t see the tears. That was our single longest training paddle to date, and the second-longest paddling day we’d ever done – including race days.

Wrapping Up Day One

After finishing, I was the hungriest I have ever been. It was 10 pm and we had an early start the next morning (and an hour+ drive ahead of us). Taco Bell has never been so delicious. I tried to convince my husband that the party pack of a dozen tacos was the best option. He didn’t go for it, but I still attest that we could have finished that off between the two of us that night. We wolfed down our food in the parking lot and hit the road for home.

One of the best rewards of a back-to-back paddle plan is that you don’t have to wash or put away any gear between trips. The downside is that you’re probably putting your wet gear on early in the morning, when the day hasn’t quite warmed up yet. It’s worth it. For our Sunday paddle, we launched from Narrows Park. We then ran the Tacoma Narrows and took a short break at Lisabuela on Vashon Island. From there, we finished the North half of Colvos Passage and landed at Southworth. On the final leg, my husband plucked a rose that was floating in the water and put it under a deck bungee. After packing up, we just needed to make a quick detour to pick up the car in Gig Harbor on the way home before washing and storing our gear.

All told, we ended up driving a combined 200 miles in order to paddle about 20% of that distance. However, the elegance of how the plan came together and the fact that we were able to combine the first shuttle car drop with a commute and a date night really made it seem like we barely had to do anything to make it work. I recommend using the launches at ferry terminals in the Sound as your shuttle destination if you have any concerns about leaving your car overnight. Ferry parking lots are designed for just such an occasion. For a nominal fee, you know that you’re parking in an area that has some level of security (you still shouldn’t leave any valuables in your vehicle) and where you won’t get towed – just pay the fee to park.

I really loved that our launch point for our first day’s paddle was the finish point for our second day. It was really getting two shuttle cars for the price of one. 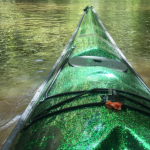 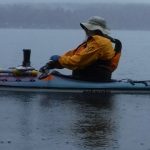 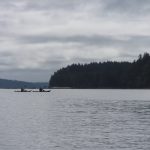